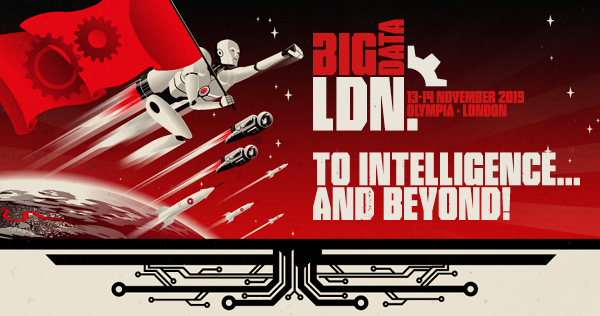 The record numbers of attendees crowding the walkways and free-to-attend theatres at Big Data London’s 2019 was proof positive London has a sparkling future as Europe’s capital of data regardless of how upcoming elections go.

With a larger than ever crowd voting, with its feet, to show up at Olympia, booths and food stalls were busy fueling data experts from all over Europe. Meanwhile their minds were feasting on the secrets of big data success from their peers. Data leaders heard from Mercedes-AMG Petronas, Experian, Public Health England and Lloyds Bank in the keynote.

In addition the top names in tech such as IBM, Microsoft, Google (Looker) and others showed off their latest wares, while the relative newcomers including Dataiku, Segment and H20 gave chase and more established names like Couchbase, MicroStrategy and Pepperdata brought new relevance to tried and trusted technologies to a fresh audience many using BigDataLDN as free-of-charge, yet immensely valuable market research.

For those with more of a technical bent, the data science community, there were the world’s brightest and best data software and services vendors. Senior figures and VPs were paraded across tech-centric theatres offering deep dives into AI, Governance and MDM, Fast Data, DataOps Self-Service and Customer Experience.

Then there were the panels, where industry experts debated the issues which many data experts struggle with at their workplaces in isolation. Notable was the launch of the Fourth Industrial Revolution report, in its third year and available for free download here. The Data4Good session, illustrated how Big Data can aid the preservation of Scottish natural resources, the fight against rhino poaching and the deactivation of landmines across the world.

Taking diligent notes in many of these sessions were dozens of UK media and analysts including ITV, The Telegraph, Computer Weekly, Verdict, ITPro, IDC and TechMarketView. Onsite interviews were aided by a much upgraded press area and the attendance of BrightTalk’s on-site video studio.

Many media also attended the launch of the London Office of Technology and Innovation (LOTI) a brand new Smart City and open data initiative for the UK capital, led by new LOTI Director, Eddie Copeland. He introduced LOTI City Tools: London, an integrated dashboard a goal to enable all London’s borough councils a consolidated view of citizens engagement with government services.

On the busy showfloor, it was not all just hard graft. With a full-size F1 car simulator and a Pac-man game the size of a wall drawing lines of eager competitors. More noticeable this year was the diversity of the attendees, with a healthy mix reflecting the full spectrum of the Big Data community across data creators, data modifiers and data consumers.

Day Two promised much more with special guests including the infamous Cambridge Analytica whistleblower Chris Wylie, whose testimony resulted in record fines imposed by the UK Information Commissioner’s Office. Chris' seminar session was streamed live to all 9 theatres at the event, with few seats remaining. While the best is perhaps yet to come, there is little doubt that next year’s show, due to top this year’s record attendance once again, is going to be a very tough act to follow.